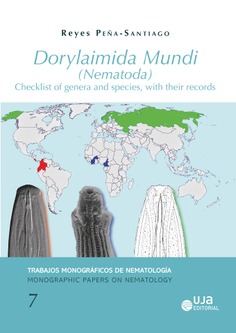 Checklist of genera and species, with their records

Dorylaims, the members of the order Dorylaimida, probably are the most diverse ordinal taxon within the phylum Nematoda. Because of their worldwide distribution in continental habitats and their variety of life strategies, they are regarded as good bioindicators of environmental health. This book provides a compendium of available information about dorylaimid taxa and their geographical records. Based on the scrutiny of a total of 3385 documents, mainly journal papers, but also books and monographs, it includes 3453 nominal species (3088 valid, 244 synonymous and 121 inquirendae or incertae sedis) and 363 nominal genera (285 valid, 75 synonymous, 3 inquirenda), which were described until the end of 2020. The book consists of four recognizable sections. Most content focuses on updating the catalogue of taxa, together with the references recording each of them. Besides, geographical (country, archipelago, etc.) and environmental (habitat) data about every species are also given. The second part presents the references mentioned in the main body of the work. The third section offers an alphabetical list of generic and subgeneric names, whereas the fourth one gives an alphabetical list of species names. The book is addressed especially, but not only, to young researchers, who very often face serious difficulties to find suitable bibliographic references to confirm species identification or simply to access previous records of a particular taxon in a definite territory. Thus, it aims to assist and to guide any nematologist interested in the exploration of dorylaimid diversity and its geographical distribution.